View source
watch 01:36
We're Getting Mutants in the MCU - The Loop
Do you like this video?
Play Sound

This is the first series not to feature the main cast from Series 1 and Series 2, as they were entirely replaced for Series 3 (with the exception of Kaya Scodelario as Effy).

Series 3 introduces the "second generation" of characters, which are featured in both Series 3 and Series 4. They are replaced in Series 5 by the "third generation".

In terms of the show's continuity, Series 3 begins place 3 to 4 months after the end of "Final Goodbyes" (episode 2.10) due to the beginning of a new academic school year.

Series 3 takes place during the character's first year of sixth form (equivalent to junior year of high school in North America, or Year 11 in Australia).

The third series features a brand new cast (bar the ones noted below), replacing the main cast from Series 1 and Series 2. Thus, the third series introduces nine major characters and one major supporting character.

Kaya Scodelario returns as Tony's younger sister Effy Stonem, who now that her brother has gone off to university, is the "new queen bee - attractive to all around her, utterly in control of herself and totally independent."[1][2]

Lisa Backwell, having made an earlier appearance in "Effy" (episode 2.07), returns as Pandora Moon, Effy's best friend who is "an adorable virgin and a sweet tooth for naughtiness."[3][4]

Relative newcomer Merveille Lukeba was cast as Thomas Tomone, someone who is described as "a good, honest, honourable soul."[5][6]

Actor Jack O'Connell was then cast as James Cook, described as "Oozing charisma, Cook pulls off daring and dangerous stunts, knowing his friends will always be there to bail him out."[7][8]

Similarly, relative newcomer Luke Pasqualino was cast as Freddie Mclair, whose "got bags of potential but no va va vooom."[9][10]

Ollie Barbieri, in his first acting role, was chosen to play JJ Jones, described as someone who has "got a huge imagination, with child-like excitement, and dreams up entertaining schemes."[11][12]

Relative newcomers (and real life twins) Megan Prescott and Kathryn Prescott were cast as identical twins Katie Fitch and Emily Fitch, respectively. Katie is described as someone who wants to "shed her identical twin skin, and establishing her individuality."[13][14] while Emily is someone who "likes being a twin, but she's crippled by her own shyness and depends on Katie to be the dynamic one."[15][16]

Newcomer Lily Loveless was chosen to play Naomi Campbell, who is "passionate, political and principled, no one believes in anything anymore - except for herself that is."[17][18]

Actress Klariza Clayton was cast as the show's major supporting character, Freddie's sister Karen Mclair, whose "goal is to become a singer any way possible, even if it means exploiting her mother's death."[19]

Series creators Bryan Elsley and Jamie Brittain served as show runners for the third series, however only Elsley served as an executive producer, along with Charles Pattinson and George Faber and John Griffin.[20]

The third series was produced by Company Pictures.

Chris Clough and Anne Boyd served as producers for the third series.[22]

The regular directors for the third series were Charles Martin and Simon Massey.[23]

* A^ All ratings are official ratings taken from BARB's database, unless otherwise stated. Total Viewers include official E4+1 ratings.[36]

* B^ All ratings are official ratings taken from BARB's database, unless otherwise stated. Total viewers do not include E4+1 ratings, as they were not in the top 10 rated E4 +1 programmes for that week; thus there is no official ratings for viewers watching on E4+1. Viewers on E4+1 typically add 200,000-300,000 to the rating.[36]

All the mini-sodes were eventually included as a special feature on the DVD released of Skins: Complete Third Series.

To advertise the third series of Skins, E4 created a trailer of featuring the new cast participating in a debauched night of heavy drinking and recreational drug use at a pub. Eventually, a large scale fight breaks out, causing the cast to escape from the police through the pub's roof, where they all jump off and escape into the night. The song used in the trailer is "Halfway Home" by TV on the Radio. 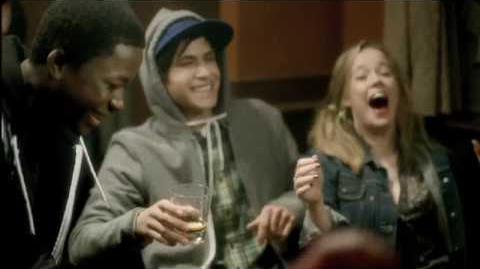 The Third Series received mixed reviews in the UK, with criticism especially placed on the entire cast change and how the loss of the "first generation" was heavily felt. Others criticized the excessive promotion of the new cast as a failed attempt at making them seem "edgier" then their predecessors.

The Independent gave the series a mixed review, stating that "As before, Skins is slickly made, but I remember the earlier series being more nuanced. What was striking about last week's opening episode was the absolute inadequacy of every single adult character, their complete subordination to comic business. Though the central characters were disappointingly two-dimensional, the adults were barely even points on a map; nobody over the age of 17 was granted anything approaching an inner life, a point of view, sympathy".[37]

Reception in North America was also mixed, although reviews positively praised Kaya Scodelario's performance as Effy Stonem. Entertainment Weekly, although giving the third series a C, included Scodelario on their 2009 Summer Must List as their "Must Bad Girl" for her role as Effy.[38]

Bulls-eye.com gave the series a positive review, giving it 4 out of 5 stars, remarking that "In any event, there’s one thing that I’m sure of in regard to “Skins”: It’s an immensely engaging series that never stops entertaining; it’s just a matter of whether or not you’ll find the material in direct conflict with your worldview. Plenty of people will judge it to be trash, and they might be right, but I’d encourage anyone willing to give it a chance to at least sit through the entire ten-episode season before making that call, because at the end of the day, it has far more heart than not".[39]

Denofgeek.com gave the series a negative review, stating "Series 3 could be politely described as 'patchy' which is a nicer way of saying 'barely coherent sprawling mess'. Rebooting with an almost entirely new cast was a bold move, however, they turned out to be a poor replacement for the originals, with only Jack O'Connell as Cook being convincing. It's focus was so intent on setting up the dullest love polygon ever between three musketeers JJ, Cook and Freddie with the "like, totally deep" Effy at the centre. (It didn't help that Freddie and Effy had about as much charisma and chemistry between them as the average paving slab.) It had no time for silly things like rounding out the rest of the cast beyond cardboard cutout characterisation or believable storylines, such as Emily coming out as a lesbian, then sleeping with JJ because... well, there was five minutes left at the end of the episode, I guess. It was also indecisive in tone, shifting from serious drama to high comedy so quickly it gave viewers whiplash - the finale culminating in three friends turned rivals fighting for a girl's love by running through a small town with old ladies on their backs. It had become everything people who hated it said it was. At the end, it even seemed to recognize how lost it had become when Cook asked, 'So what do we do now?'"[40]

Although reception of the series was mixed, the "Naomily" storyline received extremely positive reception in both the UK and North America, along with proving popular with lesbian viewers; a poll conducted by American gay women's' media website AfterEllen.com ranked Naomi and Emily as the top two fictional lesbian and bisexual characters.[41]

Sarah Warn, editor-in chief of lesbian-based website AfterEllen.com wrote that the relationship between Naomi and Emily "was one of the best-developed and most honest depictions of a lesbian teenage relationship that I've ever seen on TV."[42] The entertainment editor for eurOut.org, a website for European lesbians, thought that Naomi and Emily's storyline was "definitely one of the best portrayals of teenage lesbians I've ever seen", writing that "when the focus is more on cute girls falling for each other, this show isn't half bad".[43] Another eurOut.org writer, Cate O'Neil, said that "Naomi" (episode 3.06) was "probably the best individual lesbian episode I have seen on TV. Ever."[44]