Series 2 continues to follow the "first generation" of characters, which are featured in both Series 1 and Series 2. They are replaced in Series 3 by the "second generation".

Further, a new academic school year has begun, with the characters now in their second (and final) year of sixth form (equivalent to senior year of high school in North America).

The second series retained the nine main leads from the first series but added a tenth lead to the main cast.

Nicholas Hoult returns as Tony Stonem, whose character is dealing with significant changes in his life due to his injuries from his horrific accident that took place in "Series Finale" (episode 1.09).[2][3]

April Pearson returns as Michelle Richardson, now Tony's ex-girlfriend who broke up with him as she was unable to handle seeing him in his invalid condition.[4][5]

Mike Bailey returns as Sid Jenkins, whose is now in a relationship with Cassie but is unsure whether they can survive a long term relationship.[6][7]

Hannah Murray returns as Cassie Ainsworth, who has now moved to Scotland and seems to be oblivious about Sid's qualms about their long term relationship.[8][9]

Larissa Wilson returns as Jal Fazer, whose seems to have more self confidence as "her braces are off and this girl is ready to have some fun".[10][11]

Joe Dempsie returns as Chris Miles, who still is reeling from Angie's rejection, attempts to move on from it while also starting to see Jal in a different light.[12]

Dev Patel returns as Anwar Kharral, whose friendship with Maxxie has been restored but the appearance of a mysterious girl will cause a rift in their relationship.[13]

Mitch Hewer returns as Maxxie Oliver, who grows closer to Tony while also dealing with a female stalker, who eventually attempts to come between him and Anwar.[14]

Kaya Scodelario returns as Tony's younger sister Effy Stonem, who still reeling from seeing her brother almost killed, begins to bond with Michelle while also speaking much more, getting out from her almost mute state.[15]

Aimee-Ffion Edwards was added to the cast as Lucy, commonly known as Sketch, who is decribed as the "new kid on the block. Sketch has three interests in life: Maxxie, Maxxie and Maxxie.[16][17]

Both Georgina Moffat and Daniel Kaluuya return as major supporting characters Abigail Stock and Posh Kenneth, respectively. Abigail, still in love with Tony, attempts to use his invalid condition as a way to get closer to him. Posh Kenneth returns for another school year and bonds more with the gang.[18][19]

Series creators Bryan Elsley and Jamie Brittain served as show runners for the second series, however only Elsley served as an executive producer, along with Charles Pattinson and George Faber.[20]

The second series was produced by Company Pictures.

The second series' theme song is a remix of the official theme tune used for Series 1.[25]

* A^ All ratings are official ratings taken from BARB's database, unless otherwise stated. Total Viewers include official E4+1 ratings.[37]

* B^ All ratings are official ratings taken from BARB's database, unless otherwise stated. Total viewers do not include E4+1 ratings, as they were not in the top 10 rated E4 +1 programmes for that week; thus there is no official ratings for viewers watching on E4+1. Viewers on E4+1 typically add 200,000-300,000 to the rating.[37]

Unseen Skins are a series of canonical online-exclusive mini-episodes that fills in a narrative gap somewhere in the timeline from the episode it correlates to. During the course of Series 2, nine "mini-sodes" were released on E4.com the day after each new episode aired.

All the mini-sodes were eventually included as a special feature on the DVD release of Skins: Complete Second Series.

To advertise the second series of Skins, E4 created a trailer of another "Skins House Party". However, it is much darker compared to the first series' trailer, as it reflects the darker tone of the second series. It features the cast among others all in various stages of undress, participating in debauchery, dancing, or seen staring pensively offscreen, all while the house they are in is slowly falling apart and becoming dilapidated. The song used in the trailer is "Nude" by Radiohead. 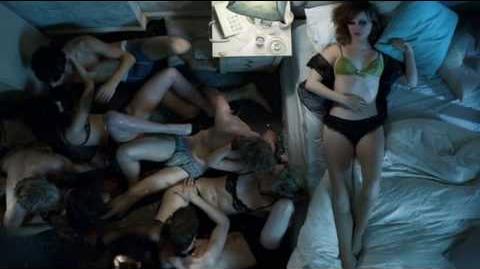 The second series received generally positive reviews in the UK, with more praise than compared to the first series.

Brooker of BB4's Charlie Brooker's Screenwipe gave the second series a positive review in his Guardian column "Screen Burn", and specifically stated that "the series had [initially] wrong-footed me", as his initial expectation of Skins was that it was a shallow show, however his opinion changed only after he had finished watching the second series.[38]

In his book Doctor Who: The Writer's Tale, Russell T Davies and his co-author, Benjamin Cook, discuss Skins at length, with Davies praising the show's innovation in a genre that was fast becoming tired and out of date. They give high praise to the second series as a whole, highlighting the death of Sid's dad as a superb moment, and calling the finale "perfect". Davies, creator of the award-winning Queer as Folk, also praised the handling of the show's homosexuality-related storylines, saying that he knew a boy very like Maxxie in the 80s.[39]

Reception in Australia was generally positive, with more praise than compared to the first series. The Age called it a "refreshing, entertaining and worthy series" and wrote it was "compulsory viewing for parents of teenagers as much as for teens."[40]

During the promotion for Series 2, The Advertising Standards Authority (ASA) banned one of the posters, featuring Michelle on the edge of a bed with smudged makeup, looking disheveled and wearing only underwear while being surrounded by couples in various states of undress with Sid, naked but for a pillow on his lap.

The ASA stated that the "majority" of the complaints, around 28, challenged whether the "depiction of nudity and sex was offensive and unsuitable to be seen by children" while two complainants said the poster was irresponsible because it could be seen to "condone and/or encourage underage sex".

Less controversially, the ASA also recieved complaints about another Series 2 poster, which showed an aerial view of a dirty bathroom with Tony lying submerged in the bath staring upwards as if he was dead.

In its defense, Channel 4 said that Skins was an "emotionally charged and vivid portrayal" of a group of young adults in Bristol.

The broadcaster added that while the characters "often embraced a party lifestyle", the series "clearly depicted the consequences of hedonistic and irresponsible behavior".

Channel 4 also said the second series of Skins promoted in the posters was darker than the first, with the characters "facing up to the lifestyle they had previously enjoyed" and the marketing campaign "sought to reflect this".

It was aired on BBC America back to back with Series 1, as the normal episodes per season for a television series in North America contains 13+ episodes.[42]

The second series won the Best Drama prize at the 2008 Rose d'Or ceremony.[43]

Tal Rosner's graphics for Skins won a BAFTA for Best Title Sequence at the British Academy Television Craft Awards in May 2008.[44]

In March 2008 the show was nominated for Best Drama Series in the British Academy Television Awards 2008.[45]

The show's innovative marketing was awarded Best Advertising Campaign at the MediaGuardian Awards for Innovation in 2008.[46] The viral marketing preluding the second series won the Entertainment category at the Interactive Marketing and Advertising Awards 2008.[47]