Series 1 introduced the "first generation" of characters, which are featured in both Series 1 and Series 2. They are replaced in Series 3 by the "second generation". It takes place during the character's first year of sixth form (equivalent to junior year of high school in North America).

Nicholas Hoult, primarily known for his role in the 2003 film About A Boy, was cast as Tony Stonem, whose character was described as being "a born leader, whipping his crew off on a new mission at someone else's expense".[1][2]

Relative newcomer April Pearson was then cast as Michelle Richardson, someone who is "drop dead gorgeous with a quick wit that keeps everyone on their toes".[3][4]

Mike Bailey, in his first acting role, was then cast as Tony's best friend Sid Jenkins, whose character is described as someone who "lacks confidence, is socially uneasy and struggles with school work".[5]

Joe Dempsie, in his first major acting role, was cast as Jal's close friend Chris Miles, a character who will "smoke/screw/rob/snort anything".[10][11]

Mitch Hewer obtained his first acting role by being cast as Anwar's best friend Maxxie Oliver, a character who is "magic on his feet and a whiz with his hands".[14][15]

Kaya Scodelario, who was the youngest actor cast at the time of auditions (she was only 14), successfully landed the role as Tony's younger sister Effy Stonem, who is described as "mysterious and manipulative, but almost mute".[16]

Relative newcomers Georgina Moffat and Daniel Kaluuya were cast as the show's two major supporting characters Abigail Stock and Posh Kenneth, respectively. Abigail is described as "posh, pretty and pumped full of prescription medication"[17][18] while Posh Kenneth is described as someone who "offers us a rare mix of upper crust elocution and street bangin' slanguage".[19][20]

Series creators Bryan Elsley and Jamie Brittain served as show runners for the first series, however only Elsley served as an executive producer, along with Charles Pattinson and George Faber.[21]

The first series was produced by Company Pictures.

Chris Clough, Anne Boyd, and Chloe Moss served as producer for the first series, however only Clough directed a few episodes.[23]

The regular directors (including Clough) for the first series were Paul Gay, Adam Smith, and Minkie Spiro.[24]

* A^ All ratings are official ratings taken from BARB's database, unless otherwise stated. Further, Series 1 ratings do not include viewers watching on E4 +1, as the +1 ratings are unavailable on the BARB website. E4 +1 viewings typically add 200,000-300,000 viewers per episode.[36]

Unseen Skins are a series of canonical online-exclusive mini-episodes that fills in a narrative gap somewhere in the timeline from the episode it correlates to. During the course of Series 1, nine "mini-sodes" were released on E4.com the day after each new episode aired.

All the mini-sodes were eventually included as a special feature on the DVD release of Skins: Complete First Series.

To advertise the first series of Skins, E4 created a trailer of a "Skins House Party", featuring the cast among others participating in a debauched night of heavy drinking and recreational drug use. The song used in the trailer is "Standing in the Way of Control (Soulwax Nite Version)" by the Gossip, which eventually came to be considered the unofficial theme song of the show by fans. 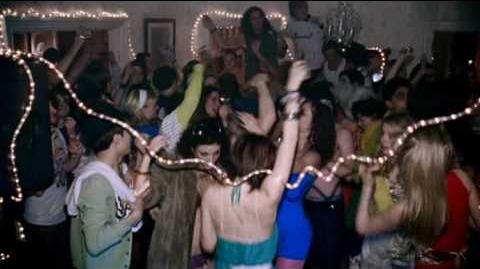 The first series received generally positive reviews when it first premiered in the UK, although some critics complained that the series depicts teenagers unrealistically and stereotypically.[37] Others criticized the excessive promotion of the show (specifically in the UK) and having relatively mediocre writing in comparison to other similarly themed shows. Actor Nicholas Hoult defended criticism of the extreme storylines, saying they would not reflect "everyone's teenage life", adding "it is maybe heightened for entertainment but all of it is believable."[38]

Stewart Lee gave the series a mixed review, remarking during an interview on the BBC4 programme Charlie Brooker's Screenwipe that he feels lucky for having been a teenager watching TV for teenagers in the 1970s and not the 2000s as "there was something really comforting for nerds and weirdos about programmes like Children of the Stones and The Changes." He said that watching Skins as a teenager today would make him feel lonelier than he already would have been.[39]

In his book Doctor Who: The Writer's Tale, Russell T Davies and his co-author, Benjamin Cook, discuss Skins at length. Although Davies praising the show's innovation in a genre that was fast becoming tired and out of date, both Davies and Cook are critical of some elements of the first series, such as the believability of Tony's character, or the episode "Maxxie and Anwar" (episode 1.06) which is described as "Carry On Russia".

Charlie Brooker gave the first series a negative review in his Guardian column "Screen Burn", stating that the series "looked like Hollyoaks getting off with Trainspotting on the set of Christina Aguilera's "Dirrty" video."[40]

Reception in Australia was mostly positive. Marieke Hardy was extremely admiring of the show, and particularly enjoyed the fact that the show was "beautiful and sad and poignant and perfectly hurtful", while also managing to give impression of being drama that is "edgy, funny and rude".[41] However, she did state that she was unsure whether the show was meant for teenagers or not.[42]

Reception in the North America was extremely positive. Entertainment Weekly gave the first series their highest score of A, calling it “more than mere shock value, sporting a wicked sense of humor as well as a surprising amount of heart.” while also calling it "a randier version of Freaks and Geeks. With accents." They specifically pointed out that "the real shock of Skins comes from its characters, who are allowed to behave like real teenagers in all their confused, irrational, hopeful glory."[43][44]

BBC America decided to air it back to back with Series 2, as the normal episodes per season for a television series in North America contains 13+ episodes.[45]

Dance was also nominated for a BAFTA for Photography and Lighting for his work on Series 1.[46]